Freeksells is the alter ego of Frederik de Ruiter, an upcoming artist and creative jack-of-all-trades. Frederik was born in 1989 in Brussels and has been living in Utrecht since 2009. He studied at the arts academy Sint- Lukas in Brussels, MIX academy in Amsterdam and the arts academy (HKU) of Utrecht.

Graphic, illustrative, street, colorful and reminiscence. These are a few key words, which describe his work. Freeksells has a strong passion for reviving old materials. Like working with second hand frames, old wallpaper torn off the walls of abandoned houses, wood from properties that are being demolished. All of which tell him a story that he then builds upon. The works Freeksells makes are generally all unique handmade pieces.

From age ten Freeksells became a skateboarding fanatic with a great interest in graffiti, which resulted in him drawing lots of decorative letters all over the place (mostly in his school workbooks). He now makes his own fonts and murals with that experience. In a lot of his present work you can find typography. Music also plays an important part in his art. Iconic album covers, song titles and artists like The Beastie Boys, The Moldy Peaches, A Tribe Called Quest and Joy Division have already been processed in his paintings, drawings and stencil art.

As of 2011 Freeksells started by painting and drawing owls, which then became his trademark and mascots. In 2013 he decided to give more realistic painting a try and he quickly developed his own style by painting portraits. It started with portraits of his own friends but by now he has also portrayed his grandparents on their 65th wedding anniversary and the marriage of the prime minister of Luxemburg with his husband in a rough combination of acrylic, pens and spray paint on canvas.

In all his versatility Freeksells also customizes baseball-caps, T-shirts, shoes and other clothing. Furthermore he gets assigned for jobs like murals in shops, live painting at events or customizing furniture, pedestals and piano’s. 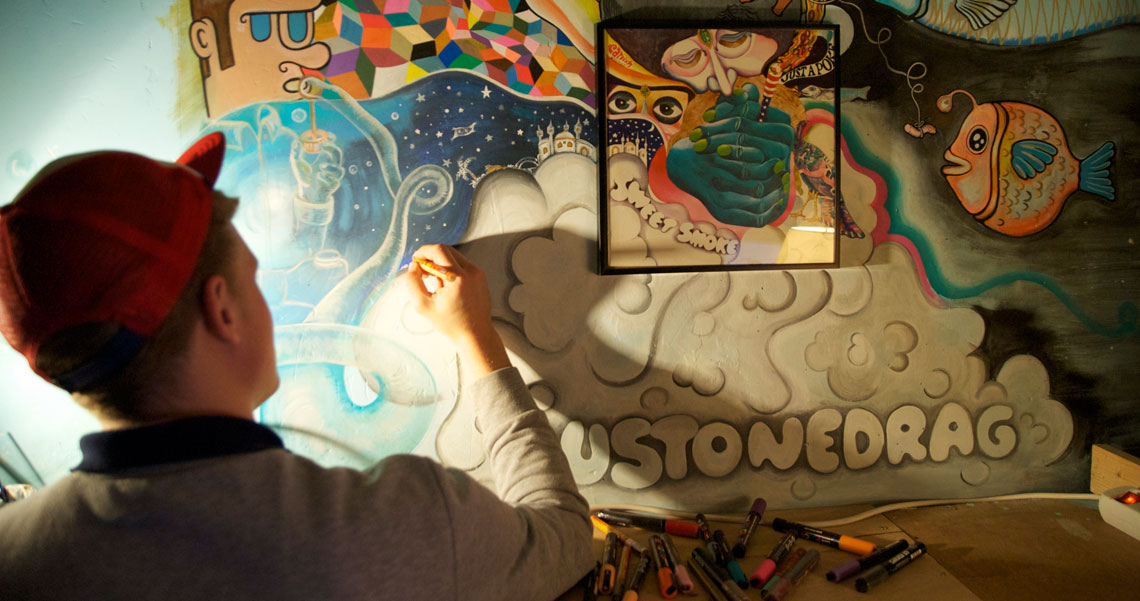